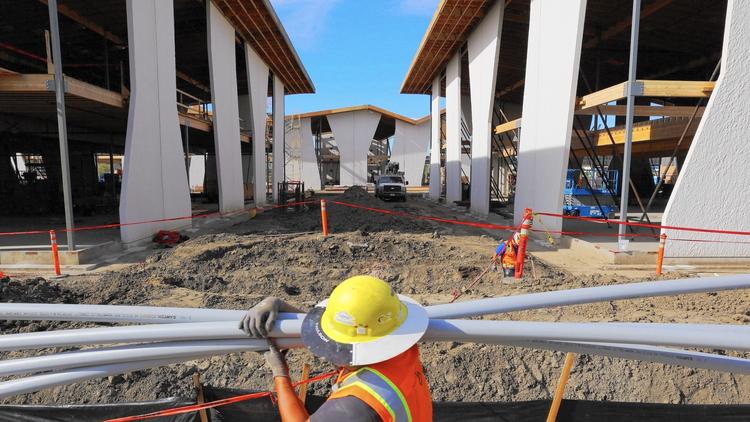 First came Facebook and YouTube. Then Microsoft moved in. Google is on its way. And now Yahoo, too, is joining the high-tech cluster that has sprouted in Playa Vista.

The burgeoning Westside neighborhood is fast becoming the Southern California hub of Silicon Valley, with a growing number of tech companies choosing the relatively undeveloped area as their gateway to the region’s entertainment and media offerings. As digital entertainment takes off, tech companies say close ties with Hollywood are more important than ever.

Centering tech’s biggest players in one Southland spot is bringing a cohesion to the L.A. tech scene that entrepreneurs had long worried wouldn’t be attainable in the sprawling metropolis.

It’s also fueling rapid change to the self-contained neighborhood of more than 6,500 residents. Already, new housing and office complexes, restaurants and co-working spaces have opened, and more developments — including an 11-acre retail, residential and office center — are underway.

Tech firms point to a number of reasons for opening outposts in Playa Vista. At first, proximity played a major role: The neighborhood is close to major freeways, the beach and Los Angeles International Airport. Moreover, there were vast expanses of land yet to be developed, a rarity in Southern California and a boon for enormous tech companies anticipating future workforce growth.

Now there’s something more. The rise of Playa Vista tech has created a vibrant community of young, ambitious employees, and that’s attracting related firms and organizations to the fold. Along a mile-and-a-half stretch, you can find media companies, ad agencies, university-affiliated institutes and start-ups working alongside the established tech juggernauts.

“There’s a herd mentality to the tech industry, so when one guy does something, everyone else follows,” said Michael Pachter, a tech analyst at Wedbush Securities in Los Angeles.

When YouTube began looking for a facility in L.A., it struggled to find a complex large enough — until discovering Playa Vista, said Liam Collins, head of YouTube Space L.A., which opened in late 2012.

The YouTube hangar has quickly become a gathering place for the business community there. It began hosting regular happy hours two years ago, with some 25 people showing up. Now 400 people swing by “and many are just walking over,” Collins said.

“We found what we needed logistically in this neighborhood, and now we hope to be a catalyst for more like-minded companies and people to come,” he said. “Our model is really built on the idea that bringing creative people together will enhance the work product of everyone involved. Having a creative, vibrant community is critical for our success, and it’s heartening to see that grow in the last couple of years.”

Tech companies and their typically well-paid, highly educated employees are plum tenants for the city and for commercial real estate brokers, who have been pulling out all the stops to get leases signed.

Los Angeles Mayor Eric Garcetti heavily wooed Yahoo, which announced Thursday that it would move its Santa Monica operations to Playa Vista. He has been aggressively pushing for the city to become a tech-entertainment powerhouse and has been enticing companies over the Santa Monica border with attractive perks.

The plan to lure Yahoo began last year, when the Sunnyvale, Calif., Internet company started looking beyond Santa Monica, where it had been for a decade, for a bigger office complex.

Yahoo considered and passed over several other potential sites, including the Bloc development in downtown L.A. and the Pacific Design Center in West Hollywood, according to city officials familiar with the process.

In November, Garcetti sent a letter to Yahoo Chief Executive Marissa Mayer offering a “menu of incentives and resources,” including a three-year business tax exemption and “white glove service” to ensure that the build-out of the campus would proceed quickly and that the company’s dealings with the city would be fast-tracked.

“The consolidation of your employees into one singular campus in the city would help elevate L.A. as [a] tech leader, ensuring that we’re able to retain quality engineers and attract and grow local funding sources,” Garcetti wrote in the Nov. 20 letter, obtained by The Times. “Personally, I view this move as paramount to our continued success.”

The pitch worked. Yahoo signed a long-term lease for about 130,000 square feet at the soon-to-open Collective campus in Playa Vista. The move, expected this fall, will bring at least 400 jobs from Yahoo’s current location, with space to accommodate growth. Internet companies generally set aside 200 square feet per employee, so Yahoo’s Playa Vista presence could expand to 650 employees.

Yahoo Chief Financial Officer Ken Goldman said the new office better matched the company’s space requirements and would enable it to be closer to the “ambience of this area” and its talent pool.

The deal was a blow to Santa Monica, which had been poised to be the region’s tech epicenter. But entrepreneurs there have long complained of traffic congestion, high office rents and cramped quarters with little to no room for growth.

“Things have gotten a little too cozy at Riot HQ in Santa Monica,” the video games company wrote in a blog post announcing that it would relocate to West L.A. this spring. “As we’ve grown, we’ve squeezed ourselves into every cranny and we’ve spread across multiple floors and buildings.”

The short migration from Santa Monica into L.A. has led to a rivalry between the two cities, with each jostling to become the premiere place for tech in the Southland.

McKeown is confident that the Colorado Center space vacated by Yahoo will soon be grabbed by another company, and noted that the city was willing to work with businesses seeking to expand. Still, he acknowledged that Santa Monica doesn’t have the space like Playa Vista to accommodate large concentrations of workers.

Garcetti, meanwhile, said he was tired of watching his city lose out to its next-door neighbors.

“L.A. city will get its fair share,” he said. “That absolutely is important to me.”

Whether it’s L.A. or Santa Monica, the region’s tech sector is thriving.

The Los Angeles County Economic Development Corp. recently released a report showing that the area has more high-tech jobs (368,600) than Boston-Cambridge, Santa Clara County and New York City. The direct high-tech workforce generated $32 billion in wages in 2013, accounting for 16.8% of all wages paid in L.A. County, the report said.

As more start-ups have emerged in the area, venture capitalists have followed.

In the Los Angeles metro region, the total amount of equity financings for venture-backed companies jumped sharply last year, up 44% to $2.3 billion across 146 deals, according to Dow Jones VentureSource.

An ever-expanding tech force in Playa Vista — Google last month spent nearly $120 million on 12 acres that it will develop in the coming years — will further bolster the region’s tech environment and the economy overall, said Wedbush’s Pachter.